Flying over the coast of Northern Norway is really spectacular, and from the air the landscape appears like a sunken mountain range, and completely inhospitable. On the northern tip of Andoya, the northern-most of the Lofoten (Lynx-foot) islands, is home to fisherman Bjornar Nicholaisen and his wife, Ingrid. As the plane comes in to land over Andoya’s peat bogs, rare flat land in this part of Arctic Norway, the first snows arrive. The turf is no longer harvested due to the availability of cheap hydro-electricty of which Norway derives almost 100% of its electricity (ironic for a country that has so much oil and gas!). Bjornar, with his signature black leather flat cap is waiting for me and he has that rare personality trait that makes you feel you have always known him. 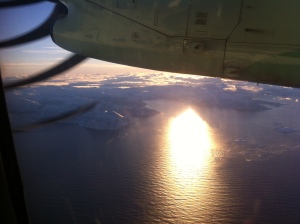 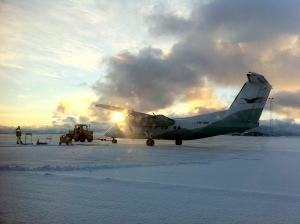 Bjornar Nicholaisen has been fighting, along with his fishermans union, against seismic shooting in the area around the environmentally unique Lofoten islands. As North Sea oil and gas in the south of Norway becomes depleted, the Norwegian government and state owned oil company, Statoil, look further north for possible new discoveries. Norway’s huge sovereign wealth fund, nearing f $1 trillion, which funds their enviable welfare and pensions system, along with a super social and civil infrastructure, derives from the black gold that was first discovered in the late 1960’s. Thanks to some very far-sighted politicians they, unlike most other countries around the world, put in place a system of tight state control and ownership that has copper-fastened Norway’s future. It was this system of management of natural resources that inspired Irish Minister for Energy Justing Keating to introduce his 1975 oil & gas legislation, since dismantled by Fianna Fáil in the 80’s and 90’s. As the flow of oil from the vast fields of Statfjord and Ekofisk slow, the race for Arctic oil and gas heats up.

Seismic shooting is a way of gathering information on the rock layers below the sea by ‘shooting’ high intensity sound waves down through the sea and into the rock below. Large ships tow an array of seismic ‘blasters’ which fire off a XdB explosion, with a similar effect to dynamite, every 10 seconds or so. As the pressure waves travel through the various rock layers in the oceans crust, they are reflected and refracted in different ways by different densities of rock. The reflected pressure waves are then measured again at the surface and a 3 dimensional map of the rock formations underneath the sea is built up. This information is correlated with already known geological data from the area and geologists can pinpoint structures in the earths crust, miles down, which have the possibility of containing oil or gas. 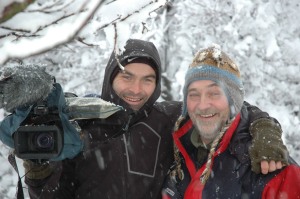 The issue that the fishermen have with this, seemingly harmless, process is the impact that it can have on fish and whales. From their experience over the past few decades in Norway, they have noticed a direct correlation between the shooting of seismic in areas to changes in the movement of fish shoals, and even deadlier impacts upon whales who use ‘sonar’ (sound waves) for communication and navigation. To put it in context, the decibel level if you stand in front of the speaker at a Bruce Springstein concert is 120dB, the level created by the seismic blasters is up to160dB. Decibels are measured on an ‘exponential’ scale, which is basically like a skateboard ramp – it gets increasingly steep very quickly! Therefore a noise level of 160dB is 10,000 (please correct me if I’m wrong) times louder than if you were lucky enough to be at the front row for ‘The Boss’! When this level of power is blasted down through the rich seas off Norway, it will inevitably pass though shoals of fish and whale. Fishermen, like Bjornar, claim that seismic shooting in an area can beach whales, and drive the shoals of cod up into the fjords or further out to sea where only the big factory boats can fish them. Given the central importance of the cod fisheries to the small communities of the Lofoten islands, and the protruding nature of the islands out into the Norwegian Sea over the crucial geological structures, this battle for Arctic oil has become a bitter dispute in Norway.

As the snow falls and the absence of the cod shoals keeps Bjornar on land, he shows me the dried cod he has preserved from last season. It loses 90% of its weight when dried and so is great for transporting. 1,000 years ago when the Vikings came to trade, and pillage the odd monastery or two, the lightweight dried fish was their fuel for their long-haul missions and they sailed faster and farther than their competing pillaging hoards! Indeed the reason they got such a bad name in Ireland is that the monateries, which were the banks of the time, were also the history writers. Very little has been recorded of the Viking activities outside of raiding monasteries, where the local Chiefs kept their wealth, and the founding of our cities and extensive trading activities is only evident from the archeological record. Ingrid cooks a Norwegian cod dish that would have been as common in Dublin 1,000 years ago as it still is on Andoya island today. As i stick my fork into a very large triangular piece of cod in the pot, I get a funny look form Ingrid, while Bjornar is splitting himself laughing. He is laughing so hard that he cannot speak, and I ask him what is wrong? After about 10 minutes he gets a breath and explains that I have taken the tail part which he dares not touch. “Why not?” I ask, as I finish the last fork of fish. “The tail is Ingrids, and I dare not touch it or I will be sleeping in the basement!”, says Bjornar still giggling like a child. Ingrid is embarrassed that Bjornar has told me I have eaten the forbidden part of the fish but I resolve to make amends in the morning. As the night closes in and the wind blows in a snow storm from the west I recall a poem written by an Irish monk a millenia ago: “Is acher in Gaíth”

As Bjornar pours himself a drop of the Jameson I got him in Oslo duty free, he remembers an old Norwegian drinking song:

Next morning I am up early scraping potatoes off a grater. I’m going to surprise Bjornar and Ingrid with ‘Boxty’ for breakfast – a 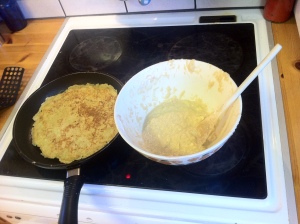 little taste of Erris made by pulping the potatoes and adding salt and flour! I think my granny would have been proud of my efforts, although she might object to me adding egg and butter. This is posh boxty and influenced by my growing up in the ‘Golden Vale’ of south Tipperary, under the shadow of the Galtee mountains. I look on in disgust as Ingrid puts honey on it – as you would a pancake – but I say nothing as she seems to enjoy it. A diplomatic incident between Ireland and Norway has been resolved. Now its off to film down by the pier with Bjornar. I can’t wait to get out in the snow!